When I first started keeping sheep on this farm, I realized right away that sheep will kill trees. Early on, the sheep killed off most of the evergreens in their pastures as well as many shrubs. But as time went on, I realized they didn't kill off all of the trees. In fact, some trees continued to have seedlings sprout, grow and become young saplings even though the sheep had full, continuous access to them for periods of time. I started observing how different trees, at different stages of growth, were affected by the sheep.

Some trees are unappetizing to the sheep, who will avoid grazing on those varieties of trees. Hickory and sugar maples are 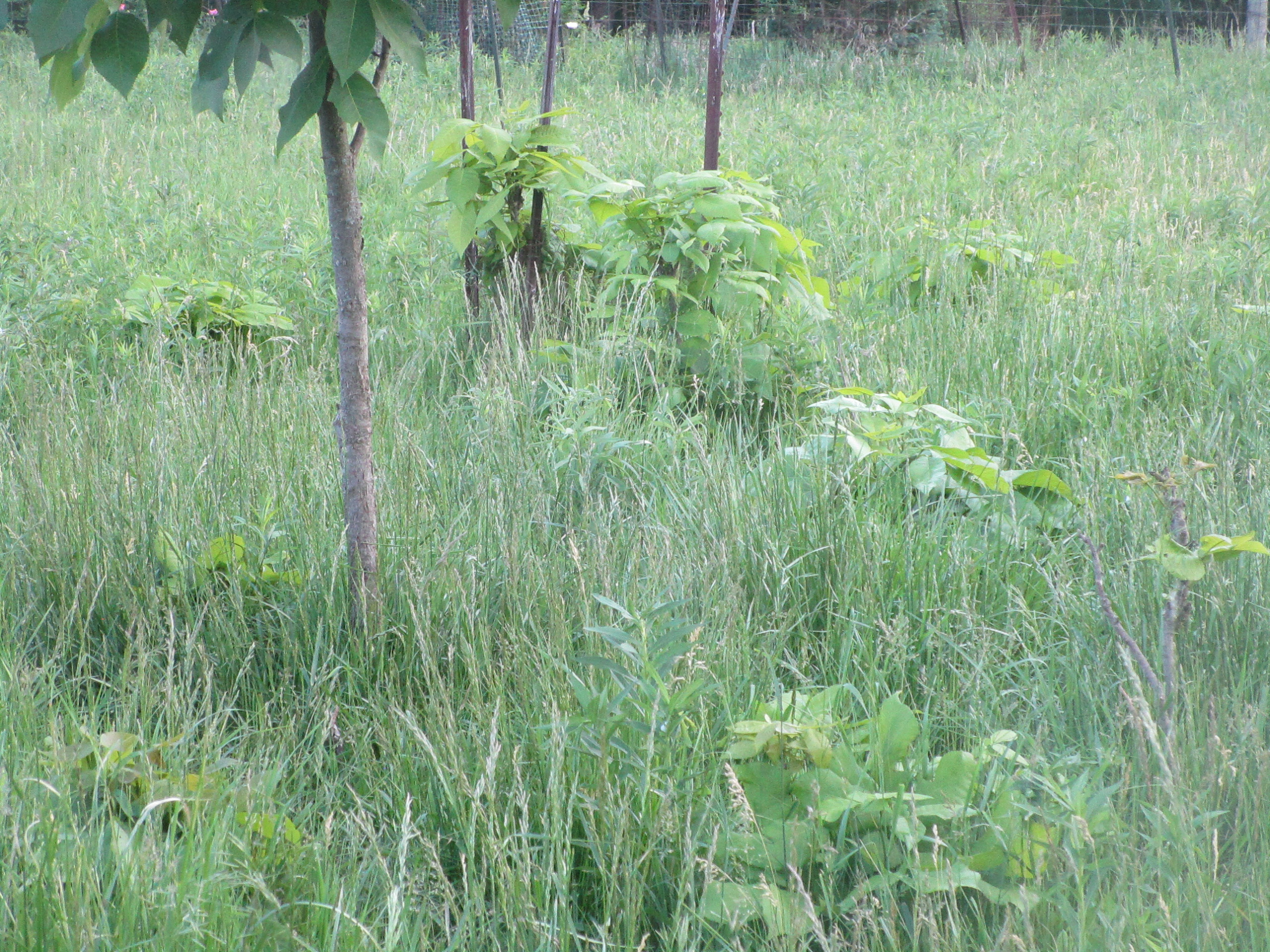 examples of trees sheep don't like, that grow here. Other trees are highly desirable to the sheep, and tend to be tolerant of limited grazing by the sheep. These trees include willow, sumac, and box elder. The sheep can graze on them in limited amounts and they tend to recover. Bushes like elderberry and dogwood are also somewhat tolerant of being grazed by sheep. As time went on, I noticed how growth patterns by graze tolerant trees helped the tree to protect itself from the sheep. When a tree sent up multiple shoots from an injured trunk, each of the shoots tended to protect part of the trunk portion of at least one other shoot, preventing the sheep from ringing the other shoots.. When many shoots sprouted, they tended to provide each other more protection than when only one or two shoots grew.

Ideas came to me regarding how trees could be planted to enhance the trees abilities to defend itself against grazing, that I seemed to observe. Being a small farmer, machines to plant, harvest and move hay are out of my budget. All of the food crops grown here are grown by hand. So I started thinking about ways I could grow food for the sheep. Food d 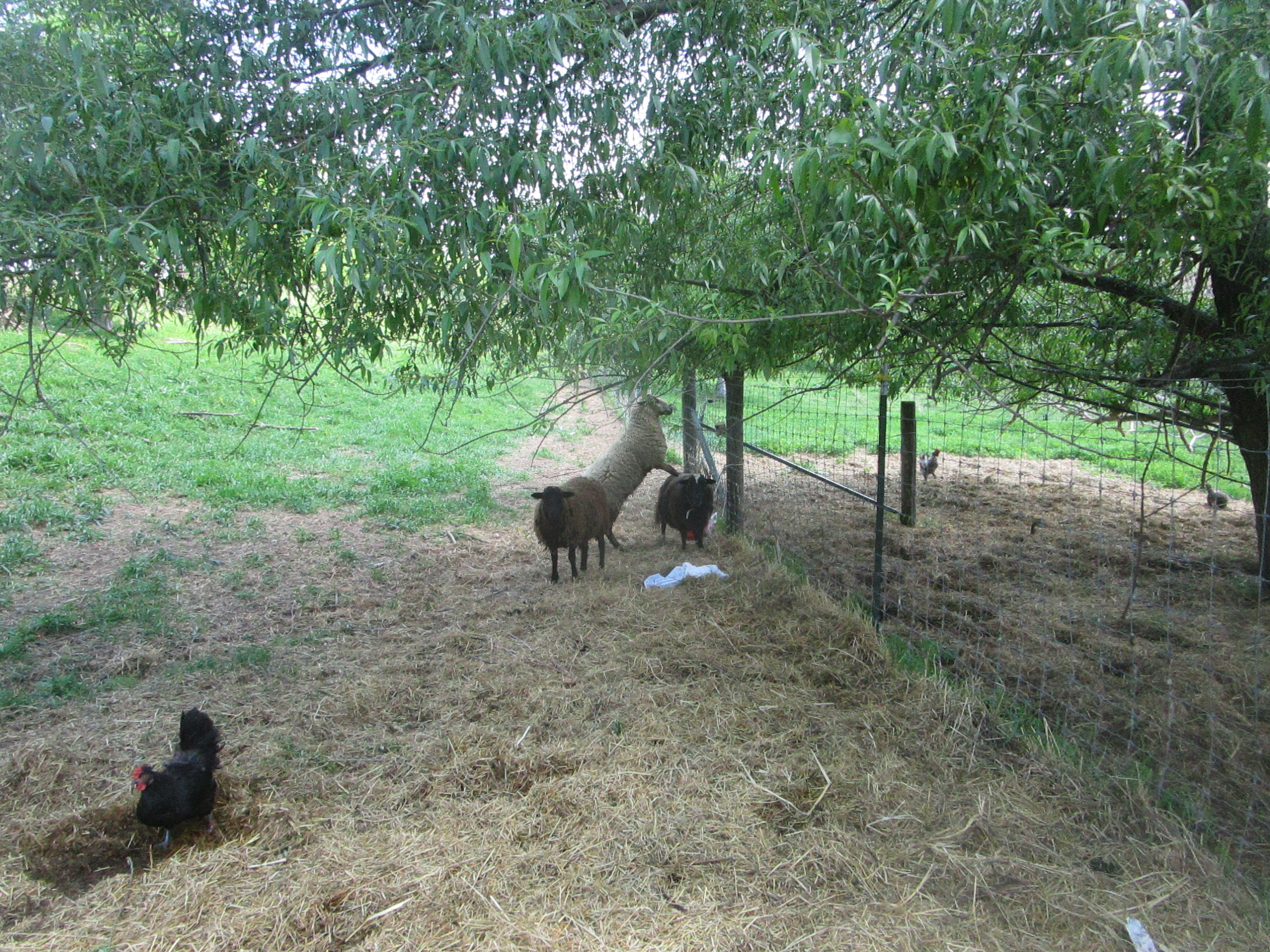 uring the summer months is plentiful. It is the winter months that determine whether or not I can sustain sheep here, so some way to grow a quantity of winter feed for the sheep using no mechanization would be extremely helpful. An additional consideration is the seasonal abundance of water during the spring, especially during the snow melt of spring thaw. A means of retaining that water would be a valuable resource for the farm and could possibly be used to provide the winter feed for the sheep. The idea of using graze tolerant, water loving trees to both retain some of the water, and use it to enhance growth that could provide graze for the sheep during winter months started to develop.

The one big expense for implementing the experiment was the cost of fencing. Fencing would be needed to be able to control the sheep's access to the planting, so that the trees could have time to recover and respond to grazing without being destroyed by it. For several years I tried to raise the money to purchase the 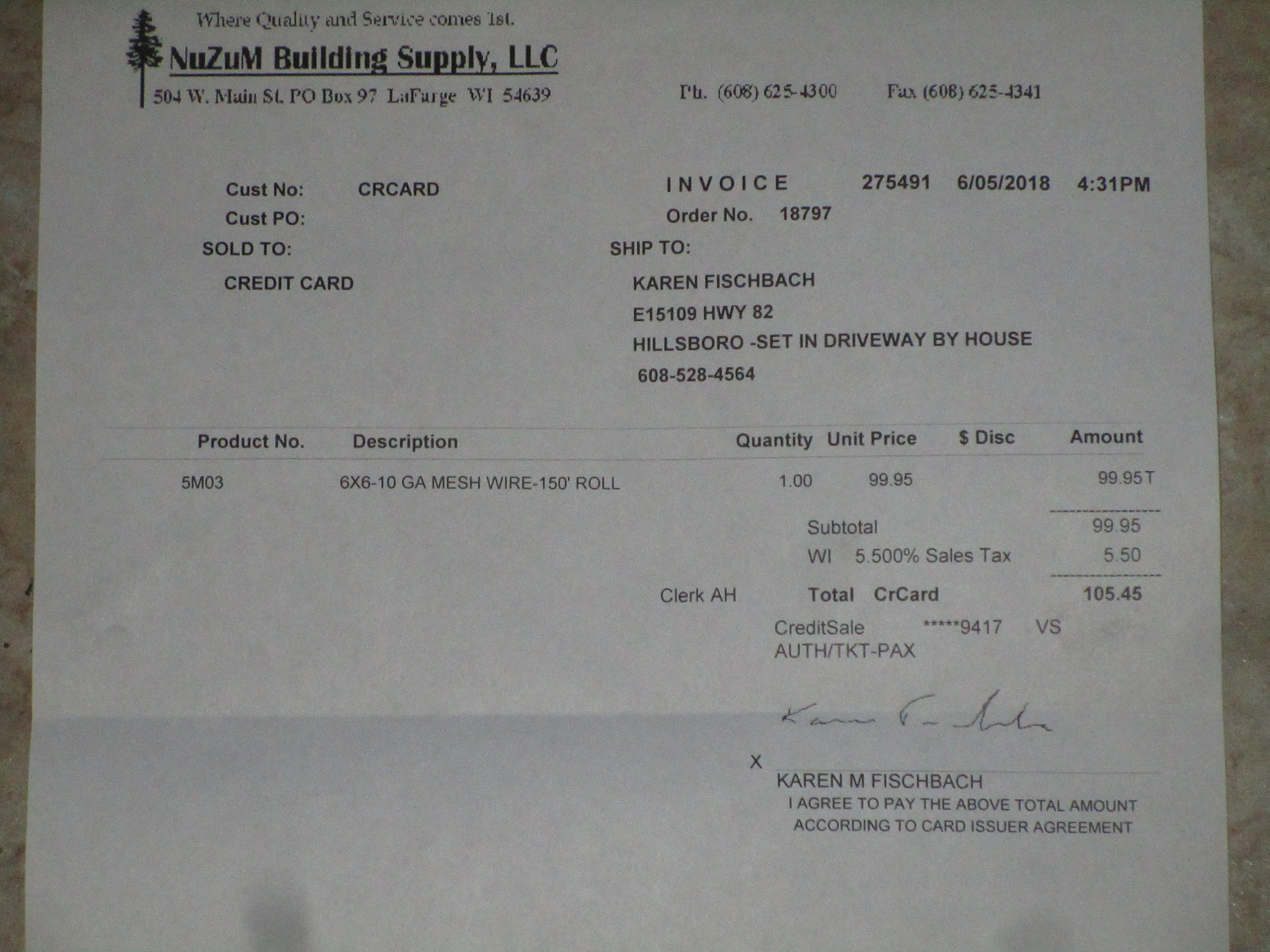 required fencing needed to implement my experiment. This spring, I received $83.00 from The Transition, and with some additional money, was able to purchase a roll of fencing for $105.45. The fencing was purchased from Nuzum's, a local company, rather than a large corporation. Nuzum's offered free delivery, if I were willing to wait until they had other deliveries close by my location. I agreed to wait. It took about a week before the fencing was delivered, which has had no affect on the project.

In addition to the fencing, T-posts, used to support the fencing will be needed. There are T-posts here on the farm that were once used to support cattle panels, but are no longer being used for that. Those T-posts can be salvaged for this project, so purchasing T-posts will not be necessary. With the fencing, I plan to enclose an area 20 ft x 20 ft, This will be cut in half horizontally along the hillside, rather than up and down the hill. I have single strands of strong wire that I will install so that the 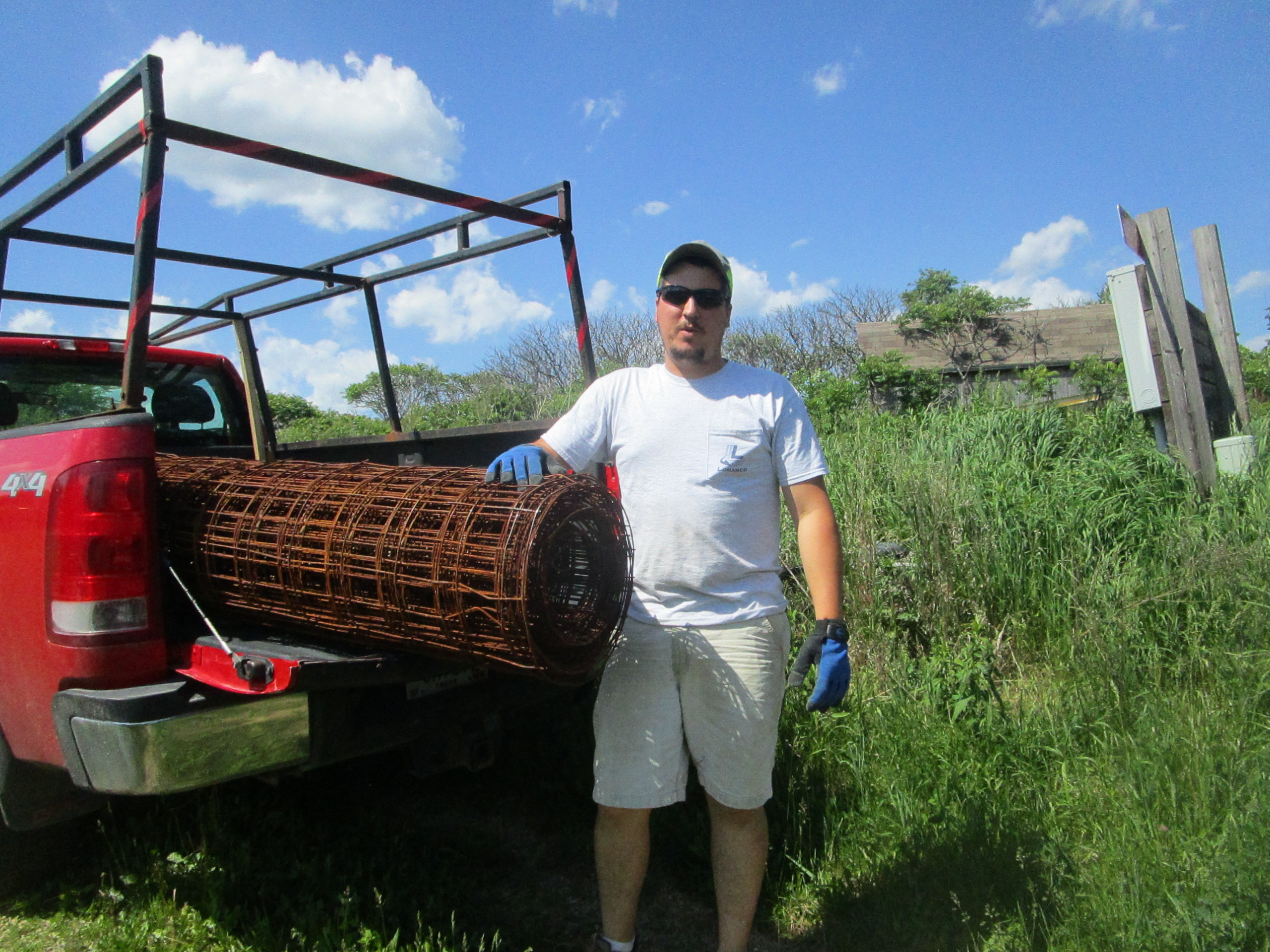 wire goes up and down the hill within the square, to further cut the area into quarters, so that each quarter can be opened to the sheep, one at a time, and then closed again to prevent over grazing. Planting trees in this manner has potentially many benefits. Water retention is one of these benefits. To enhance water retention, hydrophilic trees have been selected. The planting will include willow and dogwood. To reduce costs, the root stock for the trees was obtained from other trees on the farm, rather than being purchased. In addition, I am hoping to obtain box elder seeds to plant in within the square. Other trees and shrubs may be included, if plant material can be scavenged from elsewhere on the farm.

Elderberry grows wild here, is highly sought after by the sheep, and grows well in wet areas, so is therefore another possibility. 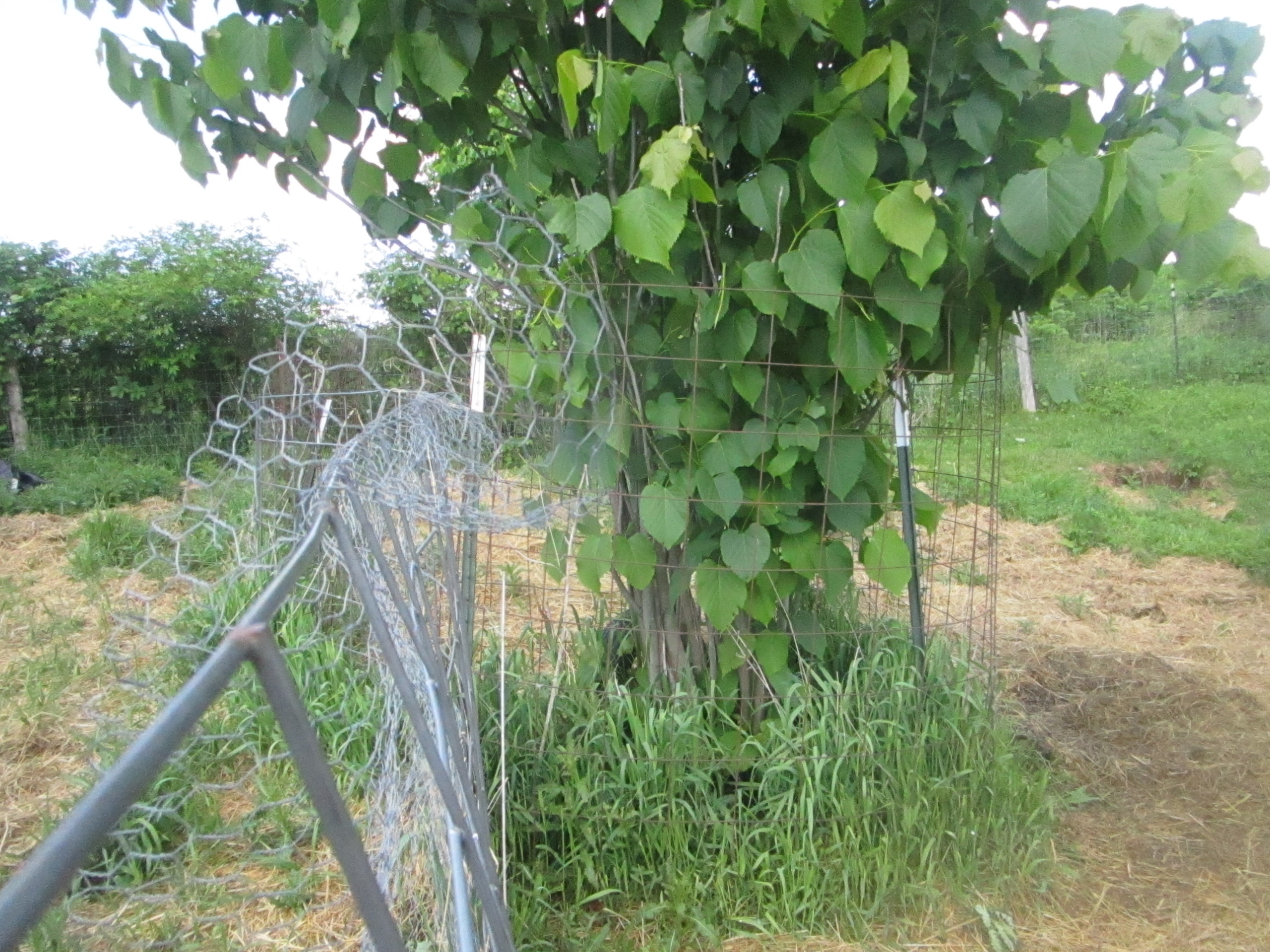 Water filtration is another expected benefit since water flowing into the proposed area is some of the dirtiest water flowing on this farm. It comes from water washing off of the highway into the ditch running along the highway at the highest points of the ridge, then flowing through four pastures before reaching the coulee. Flowing through the stand of trees should remove some of the pollutants carried off the roadway by the water.This will reduce pollutants flowing to other parts of the farm, as well as reduce pollutants flowing off the farm. In this way, this project should benefit all who use this water downstream. Planting these trees should add in retaining soil and create more resistance to erosion on the site, and hopefully, further downstream as well, as water is slowed in its flow by the trees. Furthermore, this planting should sequester more carbon and provide more wildlife habitat than is currently being done on the site.

Planting a stand of trees like this should also provide some small amount of temperature moderation as trees provide more shade, cooling the area in the summer, and provide wind screen, reducing wind chill in the winter. Beyond the above benefits, there I am hoping to realize a direct cost reduction due to being able to graze the sheep on trees during winter. If the stand of trees can provide as little as one week's worth of fodder, even if that is spread out over the course of the winter rather than 7 consecutive 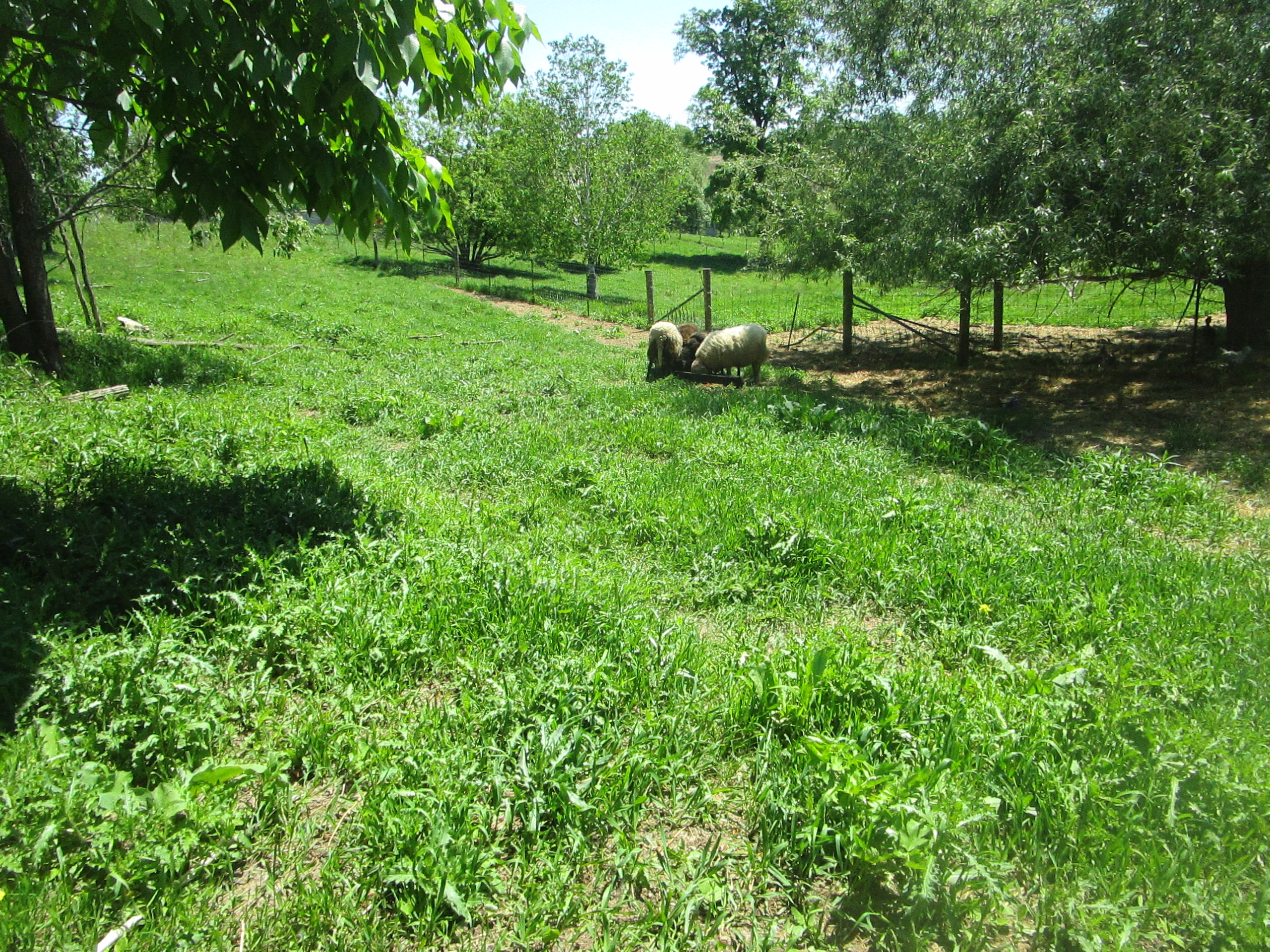 days, it would reduce hay costs by roughly $40 to $80. This is because about one small round bale of hay is needed to feed the number of sheep that live here currently for one week A small round bale of hay usually costs between $40 to $80, depending on the availability and quality of hay in a given year. So if this project replaces one bale, or one week's worth of hay with alternative winter fodder, it would save the cost of one small bale - between $40 to $80. Substituting hay with trees for winter fodder could also reduce transportation costs, both in dollar amount and in terms of the green house gas emissions resulting from fossil fuels being used for transportation.

I am hoping to realize the cost of the fencing in actual dollar savings within a five year period, or sooner. Then, this cost savings should be seen every year there after. The savings may even grow as the stand of trees matures and can produce more winter food for the sheep, without causing serious damage to the trees. Because the fencing is not consumed within this time period, it is expected that the fencing will be able to be reused after the trees have reached the point of maturity where they no longer need fencing to protect themselves from the sheep, and are able to rely on their own natural defense instead. At that point, this project could be repeated, or the fencing could be reused to implement a different type of project. Similar fencing purchased 10 yrs ago is still in use on the farm and is expected to be usable for at least another 5 yrs. There are 2 more pastures where water flows and could benefit in a similar manner from a similar planting of trees, with similar potential cost savings due to winter grazing, on this farm.

Since the trees needed for planting can be obtained from mature trees already growing on the farm, the only current limitation is the availability of fencing. Reducing reliance on hay, even by small amounts could have dramatic impacts beyond simply the cost of the hay. Currently the need for hay to overwinter sheep creates an imperative to breed the adult sheep to produce lambs for slaughter in order to raise the money to buy the hay, which supports the breeding stock overwinter. If the need for hay is reduced, so is the need to breed adult ewes in order to produce lambs for sale. Thus it becomes more economically feasible to reduce the number of lambs produced each year. This means that the farm has much more control over when and how many lambs are produced, such that the farm is much less susceptible to market conditions that previously would compel farmers to over produce lambs, and sell them at low rates. This becomes a vicious cycle and usually ends with farms going out of business. By reducing dependence on hay, it should result in a more stable financial position, more immune to outside market conditions.

By reducing reliance on hay, and using perennial trees to supplement winter fodder, worker exposure to molds, pollen and dust, which cause respiratory problems during winter months. Reducing reliance on hay should also reduce hours of labor, transporting, storing and feeding hay to sheep.j The reduction in both of these should improve worker health. While it was briefly mentioned above, it bears repeating that reducing reliance on hay reduces reliance on fossil fuels, as currently hay fed overwinter is either produced on the farm, which requires large, expensive machinery that - runs on, was manufactured with, and transported with - fossil fuels. If the hay is purchased, it then needs to be transported from the farm where it was produced to the farm where it will be consumed, requiring more fossil fuels, and more costs. In conclusion, the expectation of this project is to reduce hay costs sufficiently to be able to repay The Transition for their support within 5 years or less, and see additional multiple benefits both on the farm as well as the farm's impact on the world at large. 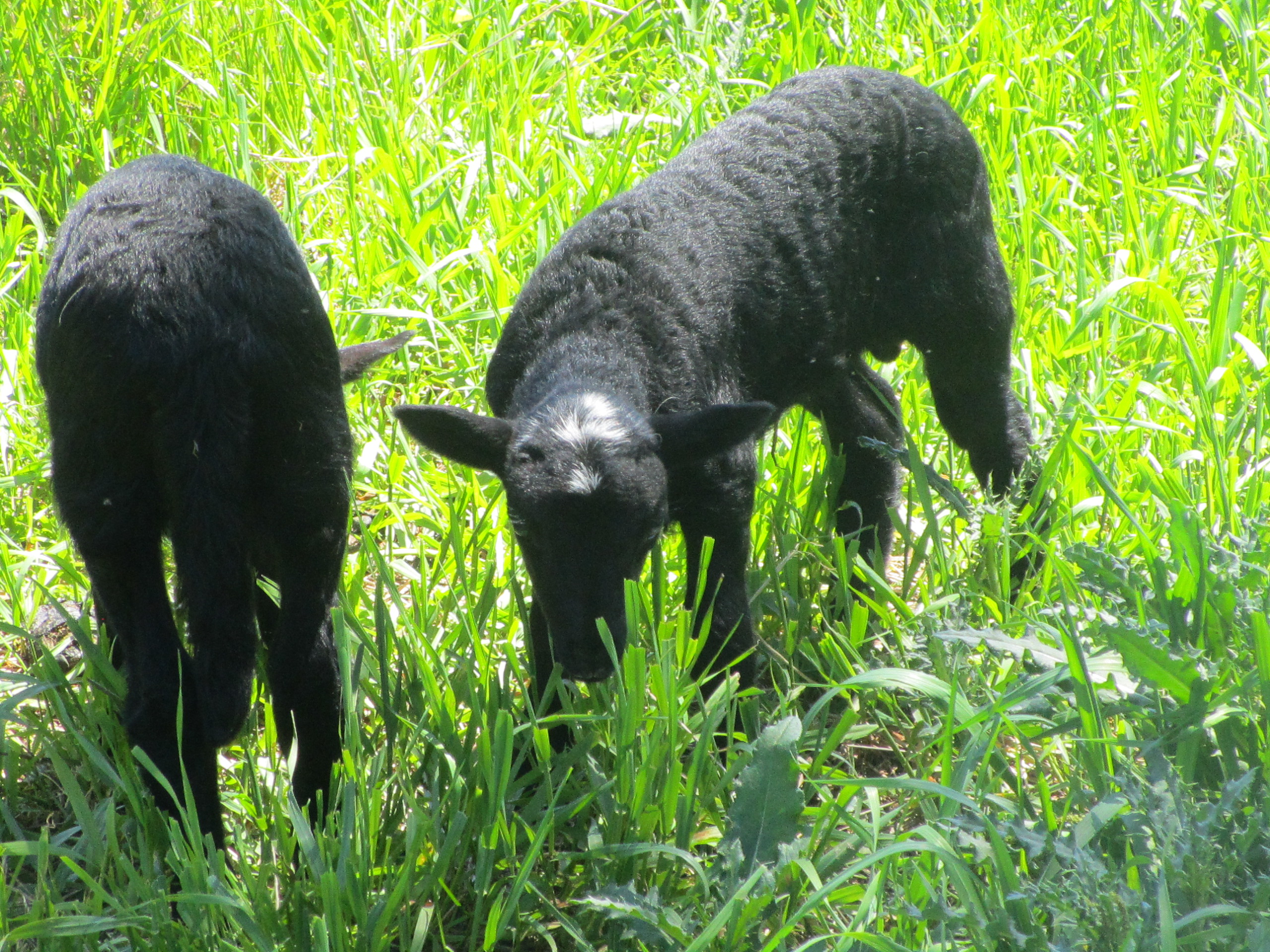