If you see fellow Transition supporters or Contributors in your Facebook feed doing awesome things tag them and let others know about it too! Here Christal tags me in a post about my podcast interview with Jenise Fryatt. The only thing that could have been better about this post is if she also shared a link for the site, but in this instance if they listen to the podcast they will get the website url. 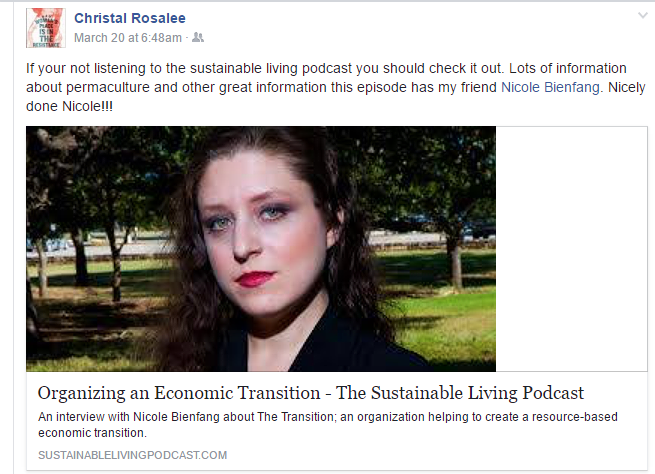 Connect the Dots for Others

Angela lives in a county that is about to have two coal fired power plants shut down, next year. She knows it's going to economically devastate this already poor rural region she lives in. She made the following post to make others aware of how The Transition can help her community. She knows that the best thing they can do as a community is take preventative measures before things take a turn for the worse. 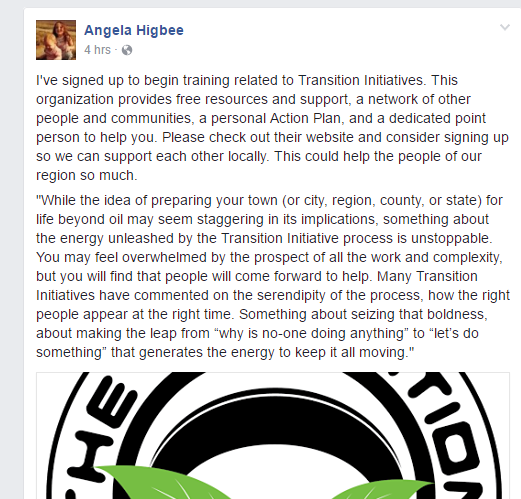 She then goes on to mention in the comments of her own thread that she herself has started Your Action Plan. This is great because not only does it show she is serious about what she says she cares about in the post, but it also demonstrates to others they can be lead by her example. People tend to not respond well to people who talk about what they "should" do, who don't do it themselves. By making this additional comment Angela shows she doesn't just "talk the talk", but she "walks the walk" as well. 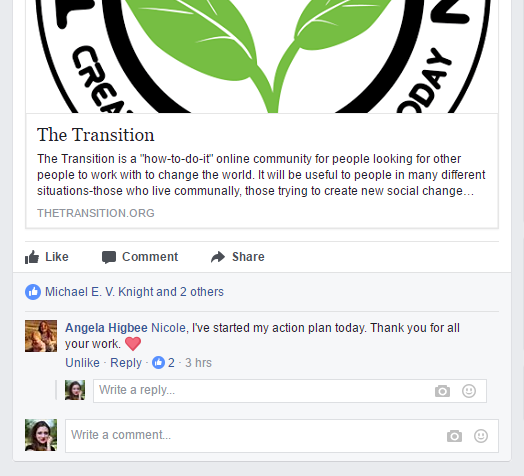 Get the Gift of Helping Others

Robert had his birthday and since he really wasn't interested in receiving gifts to commemorate his special day he told people what he REALLY wanted. He considers the best gift to be a world that is more equitable for everyone and he believes we can all achieve that if more people commit to doing Your Action Plan found on The Transition site. He made the following post to share that belief with others, essentially giving the people in his life a gift as well! You might consider trying this tactic when YOUR birthday rolls around. 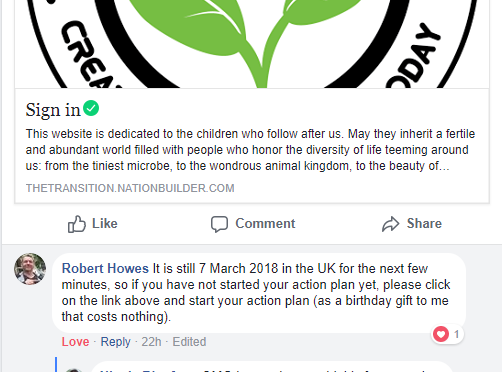 Give Direction to Those Looking for Solutions

Many people have a firm grasp about what they DON't want in their personal lives, and what they DON'T like going on in the world; but they often struggle with knowing what they DO want or if they do, they don't know how to get "there". In frustration they might make a post like the one Mike Wilson made on his Facebook personal profile: 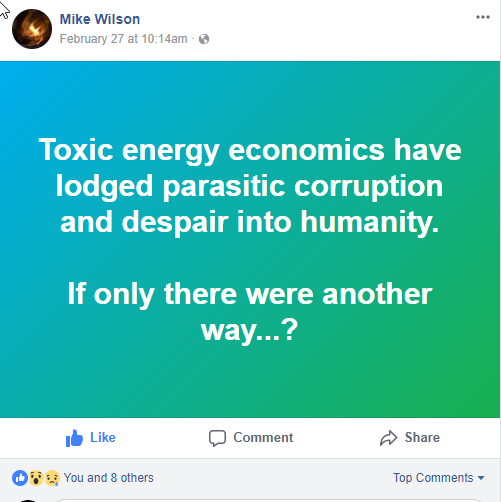 One of our Supporters Jordan Conley saw the post and responded to it: 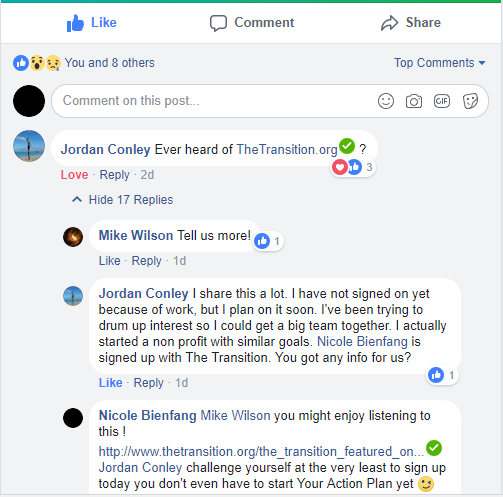 As you can see Mike was very receptive with what Jordan had to share asking for more information. He's rather new to The Transition so he tagged me in the conversation to help give Mike what he asked for. I then shared with him the Sustainable Living Podcast interview because it acts as a good overview about our org and answers most people's questions that we at The Transition hear repeatedly. I then also encourage Jordan to sign up because he had confessed in his comment he had not done so himself and stressed that ACTION is more important than time or perfection. 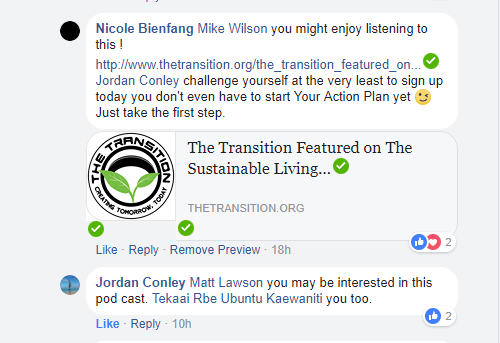 Seeing how I responded to his tag and the information I provided Jordan then decided to piggyback off of my comment and tag a few more of his friends so he could invite them to listen to the podcast as well.

Loraine posted a status that expressed his deepest desire and it popped up in my Facebook feed.

I made a comment directly in reference to that status which he "liked".

At this time he was already aware about my personal values and how they align with his own due to being my Facebook friend. He also knew about my affiliation with The Transition since he was part of our Facebook group when we were doing research and development for our website and recruiting beta testers. However, he never became a beta tester or migrated over when we shut down our temporary Facebook group page once our website was launched. My comment demonstrates to him exactly what he needs to do to get what it is he says he wants in his status. Our website was designed specifically for people exactly like him! Everyone needs a fellow "crazy dancing person". Your Action Plan was designed to do just that!

Many others replied to his thread as well. One of them commented a question directly below his "call to arms"to which I replied. 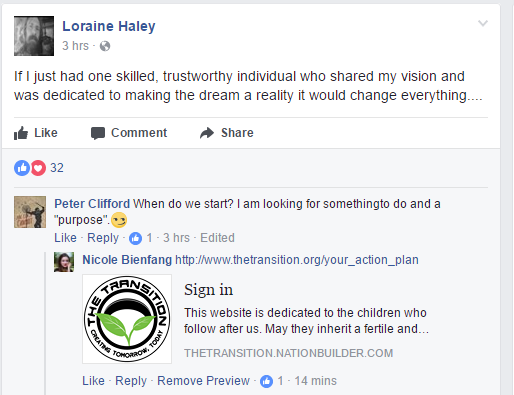 After reading my response Loraine then "liked" my comment. My one comment by default could potentially have an impact on getting Loraine back involved with The Transition and maybe inspire his FB friend Peter to get involved as well. As interest builds on this thread  many other folks may find themselves ready to take action too. When people ask questions or vent their concerns answer the "call", direct them to where they need to go to make their dreams and aspirations happen.

One of our pre-existing Contributors shared this status on their personal Facebook page . 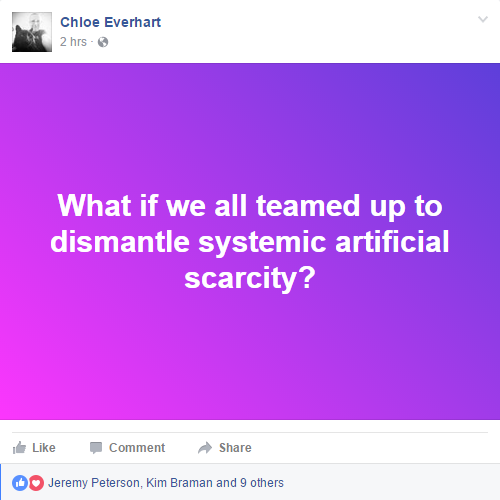 There were many comments below including this one by another Contributor:

Collectively and with no pre-planning these two Contributors demonstrated not only why The Transition is a good organization to get involved with, but also has verifiable proof of the value the site provides to those who actively use the site.

By doing so they re-inspired a formally dormant supporter to get more involved again. Which by default could inspire new people witnessing the thread to get involved for the first time! It comes full circle!

The person who shared this meme on their Facebook wall clearly wants to change the world. 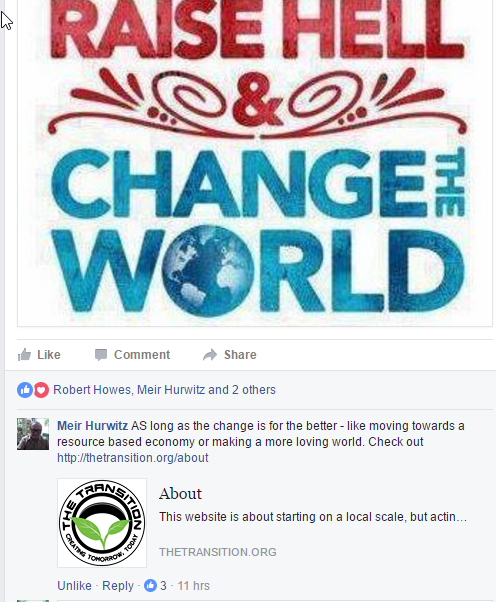 Meir let's this person know in his comment that follows that if the change they want to make is a positive one that they might be interested in getting involved with The Transition. To further educate them he offers the link to the About page so they can learn more. 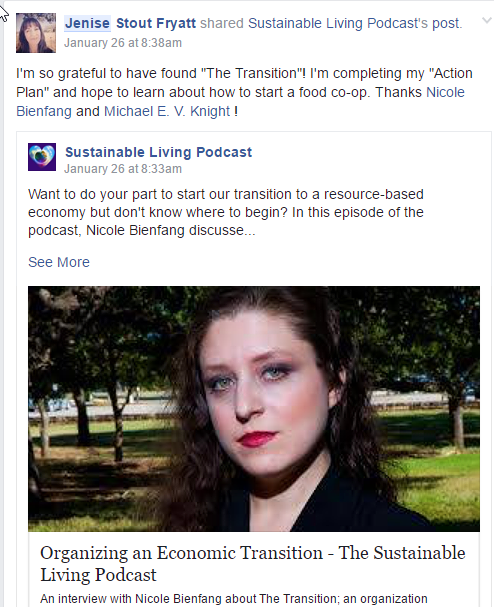 Jenise shares in her post the excitement she has for The Transition website after hosting a podcast interview with me. She also let's people know what she is most focused on accomplishing and provides a direct link to what got her excited in the first place.

People are very much interested in how others came to learn about something or why it is they think a certain way about a given topic. Help people better understand you and what you are about by sharing the origins of where your thinking came from.

Showing gratitude is an extremely effective way to promote The Transition or anything you care about. It works in the following ways: 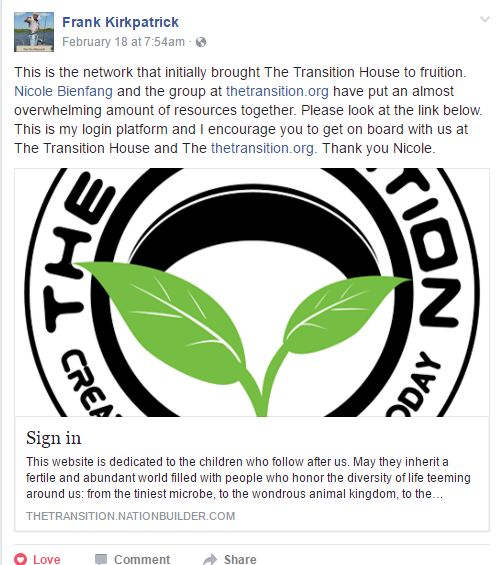 Frank's post is made more effective by him noting a "Call to Action" for people to take by saying "Please look at the link below." & " I encourage you to get on board with us".

When people edify you publicly like this it is always good to "Like" or "Love" their post. Not only does it show the person edifying you that you appreciate and respect them as well, but it communicates to others that you have a real ongoing relationship with the person.